A bass guitar is one of the most important instruments for a band. Of course, it may be of greater importance for certain musical genres but it is still a very understated instrument that does not always get its due.

There are a few different types of bass guitars and have different features to offer. The following article will take you through them. There are also different components of a bass guitar you should be familiar with, which have been elaborated upon in the following sections.

Interested in guitars instead? Check out our beginner’s guide to buying a guitar!

So let’s get started with the basics:

Meanwhile, here is how an electric guitar and an amplifier are linked:

The sound or the tone produced by both the guitars are quite different. Sure, the sound and tonal quality do depend a lot on the tonewood or the types of wood used in the guitar. But in an electric guitar, the electronics do play a huge part in distorting or regulating how the guitar sounds.

The following are some points to be noted about the sound of both the guitars:

Most guitar players complain of wrist pain. The thick body of the guitar sometimes puts more pressure on the wrist when you are strumming. This is an even greater issue with an acoustic bass guitar because the body of an acoustic guitar is thicker than an electric guitar. This is a problem that is aggravated over a period of time so if you have weak wrists, you may want to put in the work to exercise and make your muscles stronger so you do not end up injuring yourself while playing.

Apart from that, an acoustic bass guitar is surely easier to use than an electric bass guitar as the former does not require you to carry an amplifier around. It can be played on its own though it may not be suitable for every occasion.

An electric bass guitar is certainly the more versatile of the two for the following reasons:

Parts of a Bass Guitar

There are several elements that come together to create the perfect bass guitar. All of these elements are important to get the right kind of bass sound. The following are some of the most crucial parts of a bass guitar that you need to be acquainted with:

The size of the headstock does not matter as much as the distance between the strings. If the strings are placed too close together, the nut at the bottom will begin to feel the tension as the strings will have to bend at extreme angles. The mathematics of this portion of the guitar is essential.

The bridge is at the opposite end of the headstock. It is situated at the bottom of the guitar where the other end of the strings are tethered. It maintains the strings’ distance and the strings’ height.

The fretboard is housed on the neck of the guitar. The neck is divided into frets or demarcations which tell you where to place your finger on a string. By placing your finger on different frets, you can get different sounds from the same string. But apart from indicating where the notes need to be played, the frets also make it more comfortable to play the guitar as it breaks up the hardness of the wood.

There are two pots in the guitar that look like knobs and switches. One is the volume pot and the other is the tone pot and both are responsible for exactly the things they are named after. They adjust the volume and the tone of the sound.

The pots are also accompanied by a toggle switch which allows you to go back and forth between your pickups. The pickups are magnets that are able to attract the frequencies emitted by the vibration of the strings. The frequency is then sent the cables and finally into a preamp in the amplifier.

The cable jack termination point is the point at which the amp jack meets all the electronics of the guitar. The knobs, switches, pickups, etc., are all connected through wires which are combined together in a chain. The chain meets the amp jack and when the guitar is plugged into the amplifier, the jack is able to transfer the waves and frequencies to the preamp in the amplifier.

In the case of an electric guitar, the amplifier is extremely sophisticated:

An acoustic guitar amplifier is meant to reproduce the sound of the guitar faithfully:

But when it comes to bass amplifiers, things change to a certain extent:

An electric guitar amplifier will try to distort the sound, while an acoustic guitar bass might filter out the really low sounds, making your bass sound tinny.

The best companion for a bass guitar is an amplifier that has been designed specially to elevate its sound.

The following are some of the common types of amps for a bass guitar. The technology is similar to a regular guitar but the execution may differ:

A combo amp is a frequently used amplifier for rehearsals, studio recordings and performances in smaller, more intimate venues. The combo amp has a preamplifier, a power amplifier, tone controls as well as one or more speakers in the same cabinet. These amps are easier to use and transport as all the components are fit into the same unit. This is why it is a hit among smaller bands.

A head or an amp head, on the other hand, is a type of amp where there is a standalone amplifier which sends the amplified signal through a cable to speakers that are situated outside the cabinet. This is appropriate for larger performances as the speakers that are separate from the unit are able to drive more power.

Practice amps are the smallest amps for basses and are typically used only on a small scale for purposes of practicing. They do not have too much power, perhaps only 10 to 20 watts, which allows them to provide enough amplification for individual practice sessions. They are ideal for beginners as they do not produce enough power for actual use in band practice or by professionals.

Bass stacks are used for really large venues, like stadiums and music festivals. Bass players require more powerful amplification at such venues so one or more separate speaker cabinets are used. These events require 200 to 300 watts more power than regular amplifier configurations. When a separate amplifier cabinet and a separate speaker cabinet is used at such a scale, it is referred to as a “bass stack” in street parlance.

A bass guitar may sound like a very straightforward instrument. You do not need to play as many intricate chords as with a regular guitar, nor do you need to practice your strumming action as much. But a bass guitar adds depth to the overall sound of a melody which would be missing if the bass was not taken care of. The above article lays emphasis on different parts of a bass guitar. The demarcation between an acoustic bass guitar and electric bass guitar and the breakdown of the guitar has been done so you can understand how complex this instrument is and how easy it makes its job sound. Remember, the bassist has one of the most underrated but also one of the most important jobs in the band! 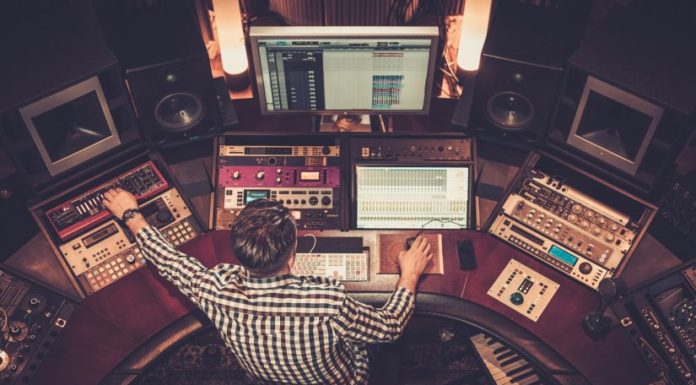 The Best Computers for Music Production and Audio Work

Bass Guitar for Beginners: A Guide to Buying Your First Bass