Pianos have been around for centuries and have been put to stunning use in the musical world for years. The traditional piano has had a long history and no piece of classical music feels complete without the grand piano.

The following is a brief guide to pianos, the different types of pianos in the market and the components that go into creating these magical instruments.

An acoustic piano is perhaps what you are used to seeing or hearing about. When you go to a concert or step out to a restaurant where there is a live band, you will often see an acoustic piano.

There are typically two types of acoustic pianos — the grand piano and an upright or vertical piano.

A grand piano can go up to nine feet in length and is horizontal. The strings in the piano are parallel to the ground.

In an upright piano, on the other hand, the strings are perpendicular to the ground and to the keys, therefore, lending the piano its name.

An electric piano is not quite electronic. It is an instrument that produces sound when you press the keys.

The keys, in turn, triggers mechanical hammers in the piano to strike either metal strings or metal reeds, wire tines, etc. The vibrations created from this process are then converted into electrical signals with the help of magnetic pickups.

A digital piano is an electronic instrument that is able to reproduce sounds that have already been sampled and saved on a computer chip that is placed inside the piano.

Today, a digital piano has taken over the vintage electric piano as it is able to reproduce the sound with great accuracy. But electric pianos are still manufactured and are in fact preferred by some musicians.

The way all three types of pianos are constructed and how they work are radically different.

The following is a brief comparison between an acoustic piano, an electric piano, and a digital piano.

The acoustic pianos and electric pianos both tend to have the full range of keys.

The source of the sound in both types of acoustic guitars is similar, however, the configuration of the strings is different. In a grand piano, the strings are parallel to the ground. Gravity does its job and brings the hammers back down to their point of rest after they hit the string or set of strings. There is a similar mechanism in place in an upright piano. The main difference is that the strings are perpendicular to the ground and not parallel. The source of the sound is the point where the hammer strikes the string.

A digital piano is completely different. It has the same keys as a traditional piano but it does not have any of the other moving parts like strings or hammers. The source of the sound in a digital piano is from the pressure you put on any key. When you press down on a key, a signal is sent to the computer chip inside which triggers the sound. While electronic keyboards do not typically have a weighted key action, a good quality digital piano may have a weighted key action so it can replicate the feel of an actual acoustic piano keyboard. You typically hear the sound created by a digital keyboard through an external sound system or through built-in speakers.

An acoustic piano of good quality can cost anywhere between $3,500 and $10,000 for upright pianos, and between $7,500 and $85,000 or more, for grand pianos. An acoustic piano requires extremely intricate workmanship and thousands of small pieces come together to create the final product. No wonder then, it is an expensive instrument.

A digital piano costs far less than an acoustic piano as it does not have most of the moving parts that the former does. It is a replication of the sound and not the actual sound. Since it relies on a computer chip and not actual moving parts to create the sound, it is easier to assemble a digital piano than a traditional piano. It is also much lighter than an acoustic piano and depending on the kind you have invested in, you can even carry it around on your own with ease.

Electric pianos have more or less been phased out of the market and have been replaced by digital pianos which are easier to use and carry. They can also replicate the sound of an electric piano with great ease.

An acoustic piano requires tuning and follow-ups every now and then. At least twice a year is required for the piano to be maintained properly. The piano also needs to be kept in optimum conditions of humidity as a lot of the parts inside the piano, which are responsible for creating the sound, are made of metal and will be prone to rust if exposed to too much humidity. The same applies to electric pianos.

A digital piano, on the other hand, does not require as much attention and work in terms of maintenance. You would need to look after it like you would care for a computer. However, if there is a need for repair in the digital piano for whatever reason, it can prove to be very expensive. An acoustic piano will not require as much repair though there is bound to be some wear and tear over the years. But on the whole, an acoustic piano will not require too much repair if it is well maintained, whereas a digital piano is low maintenance but if it ends up requiring some kind of repair, it can cost you a fair amount of money.

Parts of a Piano

The following are some of the most crucial parts of a piano. Most of these components apply to a traditional acoustic piano and not a digital piano. Some, however, are still common to both. It is important to be acquainted with the different parts of a piano because then you will have a true idea of how the piano does what it does. Even if a single component is missing, the instrument will not be able to function at its optimum or at all.

A piano is not complete without the keys. The keyboard is an essential part of a piano, whether acoustic or electric. In a full-sized keyboard, there are 88 black and white keys. The keys are what you need to press down or strike in order to trigger the strings and hammers, which end up giving you the sound you are looking for.

In an electric piano, as has been described above, when you press the key, the computer chip gets a signal, which creates the sound from its system. Digital pianos typically have a built-in speaker or an external sound system that emanates the sound.

Pedals are a very crucial component in an acoustic piano. There are anywhere between two to three pedals in an acoustic piano. The pedal allows you to play around with the sound of the piano. You can get it to sustain a note for longer, you can press the pedal to make the sound softer, etc. The pedal has the ability to change the nature of the note.

The keys, hammers and the strings are actually the parts of a piano that act as the source of the sound in an acoustic guitar. The 88 different keys are each connected to a small hammer. The hammer is covered in felt and when a key is pressed, the hammer strikes the corresponding string or set of strings. The string starts vibrating really rapidly. This vibration is what the human ear picks up as the sound of the piano. The vibration takes place in less than a split second!

In the case of an electric piano, there may be a flat steel reed that is struck by a felt hammer, a tuning fork (which has two vibrating parts) or plucked reeds.

Regardless of the type of piano it is, it will always have a lid. The lid protects the piano’s intricate interiors from gathering dust and from becoming damaged. But what is interesting is that when you prop open the lid on a grand piano, the sound becomes louder and more resonant. The audience can really pick up on the notes that are being struck in the piano. In the case of an upright acoustic piano and an electric piano, whether the lid is on or off does not have much of an impact on the sound.

The difference between a traditional piano, an electric piano and a digital piano may be complex but the guide above is only the tip of the iceberg.

The idea was to get you started and introduce you to the basic differences so you can pursue what you have learned from this guide and deep dive into your own research. There have been many technological innovations in the field of music and today a digital piano is able to sound exactly like a traditional grand piano. But for those who miss the weighted key action of the original piano, there are always electric pianos or even upright pianos that provide a quality of sound that is unparalleled.

There are several pros and cons to all the pianos that have been described above but knowing how they work and the parts that go into making these instruments will give you a better idea of which might be a better fit for you. 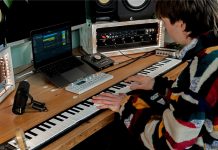 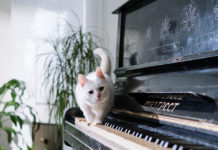 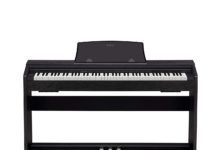 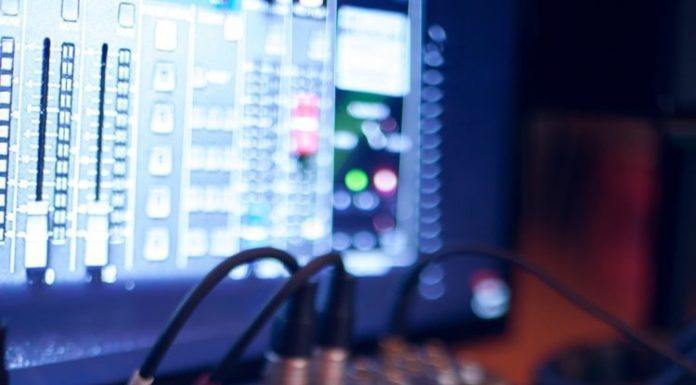 All About Guitars: Beginners Guide to Buying a Guitar

How to Learn Piano by Yourself with Apps